2016 started off with a meeting displaying the themes of exotic flowers and birds. Then, Colin Lee and Bob Patterson of Reading PS showed the Faroes and Solar System respectively. In the next meeting, Joint Secretary David Potts displayed diverse material relating to Opatija in former Yugoslavia.

February 15th saw two meetings: in the evening was the Society’s Annual 9 page competition, judged by Patrick Reid and Christine Earle – not an easy task when accompanied in the same room by the tricky and boisterous annual Philatelic Quiz. However, earlier that day, things have been more contemplative, as the society marked the 80th anniversary of the death of Frank Bellamy, who had played a key role in the development of the Oxford Philatelic Society for many years as its founding Honorary Secretary and Treasurer from 1890 to 1936. Founded in December 1890, at a meeting at which Bellamy took the minutes, the Oxford Philatelic Society has been celebrating its 125th anniversary. This event was part of those celebrations.

Bellamy also helped to establish the Oxford Photographic Society, was an active member of the Ashmolean Natural History Society of Oxfordshire, and contributed significantly to astronomy in his post as an observational astronomer at the Radcliffe Observatory. Buried at St Sepulchre’s cemetery, Frank Bellamy’s grave is virtually the first you encounter as you walk through the entrance archway: http://www.stsepulchres.org.uk/burials/bellamy_frank.html

Members of the following groups attended: Oxford Philatelic Society, Friends of St Sepulchre’s, Ashmolean Natural History Society of Oxfordshire, and Museum of the History of Science.

After several words of thanks for the life of Frank Bellamy, a wreath was laid.

Oxford Chairman Stephen Marks at the graveside of Frank Bellamy 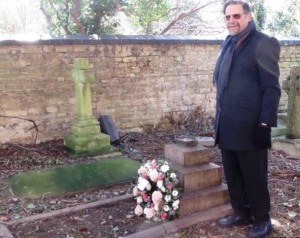 The event can be viewed at: https://www.youtube.com/watch?v=TzBB_9u2qE8

Marking the early days of the society, a March meeting was titled ‘The 1890s’, with members displaying a variety of countries: from QV GB, Persia and scenic views of British Guiana, Tasmania and New Zealand to the Treaty Ports of China and Sweden’s lovely SON postmarks, while two displays concentrated on the Royal Niger Company and Niger Coast, showing some very rare material on cover.